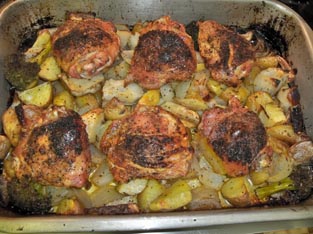 This recipe is something I cook often, and it became a topic of conversation on a No Agenda show.

It’s perfect when you do not feel like spending a lot of time on a meal since it includes both vegetables and potatoes and can be the entire meal. Adam Curry called asking for an easy chicken recipe to be done in the oven that would produce a crispy skin. This is it.

I tend to serve it with a small salad. The dish is mostly preparation with no work after that. Even a stew, which needs some attention, requires more work than this simple dish.

These ingredients are all approximate and the size and cut of the potatoes will change a lot based on cooking times and how covered you roasting pan is with chicken. This pictorial example shows 6 thighs and will allow the vegetables to cook faster than a pan jammed with 8 or more thighs.

The celery and onions and potato up being cooked in chicken fat and make a quite delicious side dish either mixed up or separated.

In the photos I added some broccoli which is used as a garnish to the disk. You can also add turnips or rutabagas to the vegetable mix. I’ve experimented with a number of things including parsnips and bell peppers. Rutabagas are the best of the lot. Some things such as sun chokes do not work. You can also leave things out. In the dish I photographed there was no celery by accident since I was told we had celery and we did not. It was still good. This recipe was derived from the need to lift some chicken off the bottom of a roasting pan for roasting.

This is a great cold weather dish too. The only tricky part is to make sure the potatoes are completely cooked. This will be dependent on how big you cut them. Know your cooking times by experimenting with roasted potatoes.